In June this year, Máire Geoghegan-Quinn, European commissioner for research, innovation and science, announced the new name for the future EU funding programme for research and innovation. The name "Horizon 2020" was chosen through an online voting competition, and acquired the majority of the votes against its competition (Imagine 2020 and Discover 2020).

The horizon is the line that separates the earth from the sky. Could this imply something about the character of the future programme? As Máire said, the new name is an important symbol of a new departure. Hence, the programme has some new elements, yet we cannot speak about a completely new departure. Many of the actions and programmes under Horizon 2020 (H2020) can be considered as a continuation of its ancestor, the Seventh Framework Programme (FP7).

Probably the most important development compared to the previous FP7 programme, is the expected increase of the programme’s budget. Using the present economical crises not an excuse but as a justification for increased spending on research and innovation, the Commission proposed an 80 billion Euro budget for the new programme. Certainly, the 60% increase, which amounts to 30 billion €, makes all the previous framework programmes look somewhat “insignificant.” Moreover, the programme has been also stretched out to encompass the already running CIP (Competition and Innovation Programme) and the general funding of EIT (European Institute of Innovation and Technology).

According to the planned budget the EIT will receive 2,8 billion € under H2020, which is significantly higher than the 309 million € it received between 2008 and 2013. On the other hand, the CIP programme will be transformed to some extent. It will have a much more direct focus on supporting the competitiveness of European enterprises and has an anticipated budget of 2.5 billion € for the next period.

The proposed budget points to the fact that the share of research and innovation funding will significantly increase. Underpinned by strong economical arguments, it is also to assume that the Commission expects form H2020 to kick start the failing European economy by creating economic growth and new jobs. The proposed budget will require the approval of the Council of Ministers and the European Parliament before it can come into effect.

Even if we take the planned budgetary increase for granted, it still remains a mystery how big portion of it will be acquired by Western Balkan countries. We can find part of the answer to this question in the statistical overview of the implementation of FP7 programme. Looking at the performance of Albania, Bosnia-Herzegovina, Croatia, Former Yugoslav Republic of Macedonia, Montenegro, and Serbia in the period of 2007, 2008 and 2009 does not provide much to hope for.

The Framework Programme by conception has a collaborative programme with global outreach, hence it is open to all researchers and research organizations across the world. However, there are certain limitations on the nature of participation depending the country of origin. Participatory countries are grouped into four categories: EU member states, candidate and associated countries, third countries with S&T agreements, and other third countries. The countries of the Western Balkans fall into the second group.

In 2009 54 calls have been announced under the FP7 programme, and they attracted all together 13.654 applications (counting only the eligible ones). Out of that pile, about a quarter was considered for funding (3.285 applications), which represents a 25.5% success rate. This success rate is significantly higher than the average success rate of the three years together which amounts to 22%.

Both, in terms of the number of applicants and the amount of Community funding, the first group, that is the EU member states, acquire the biggest share (about 90%), followed by candidate and associated countries, then third countries with S&T agreements, and other third countries being the least represented.

Figure 1. Numbers of applicants and amounts of requested Community financial contribution (in € million) in retained proposals for FP7 calls concluded in 2007, 2008 and 2009 by country group. 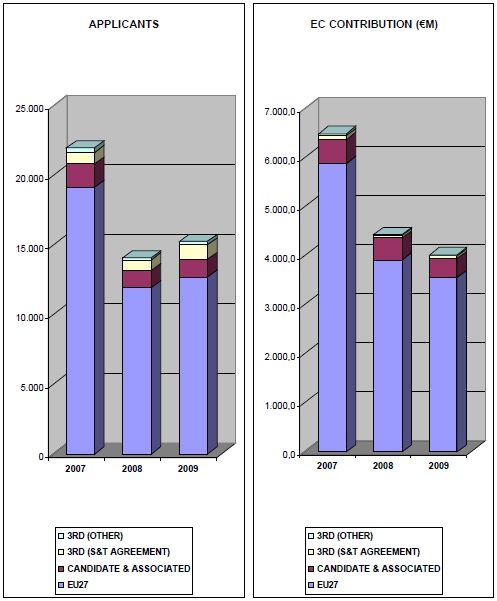 In 2009 candidate and associate countries, which is our focal point of interest, constituted 8,3% of eligible applications, with a success rate of 23,6% (with regards to applicants) and 18,7% (with regards to Community funding).

Figure 2. Numbers of applicants and requested Community financial contribution (in € million) in retained proposals for FP7 calls concluded in 2007, 2008 and 2009 for candidate and associated countries.

Considering all three years, Croatia has submitted the most applications (141) followed by Serbia (116) and Macedonia (46) on the third place. The least number of applications have been submitted from Bosnia-Herzegovina (18). In terms of financial contribution Serbia is doing rather well, as it received so far 25.9 million EUR. On the second place we have Croatia (24.2 million EUR) and on the third Macedonia (6.9). However, probably the most interesting trend to notice is that even though Montenegro is the smallest country in the Western Balkans, it has submitted around the same amount (21) of applications as Albania (20) and Bosnia-Herzegovina (18) but received as much financial contribution as these two countries together. The EC contribution for Montenegro during 2007, 2008 and 2009 was 2.2 million EUR. For Albania and Bosnia-Herzegovina it the same period the EC contribution amounted to 1.1 million EUR for each of them.

Figure 3. Success rates of applicants and requested Community financial contribution for FP7 calls concluded in 2007, 2008 and 2009 for candidate and associated countries.

These figures indicate a lacking capacity on the side of the Western Balkan countries to efficiently compete for FP7 grants. Most of the Western Balkan countries joined the group of associated and member states countries quite late (in 2007 and 2008) which might provide a reasonable explanation for the gap in performance. However it remains to be seen whether the countries will be able to catch up and shrink the evident gap in success rates under the Horizon 2020 programme.